One of the movies that got me through my college years was Al Pacino's classic Scarface. Brian De Palma made a classic movie that encompassed everything that was grimy in the 80's. Drugs, crime, guns, women, double crosses... this one had it all. Honestly, it has always been high on my list of favorite movies. It was actually the 4th DVD I ever bought. This was the poster I had hanging on my wall at Manhattan College: 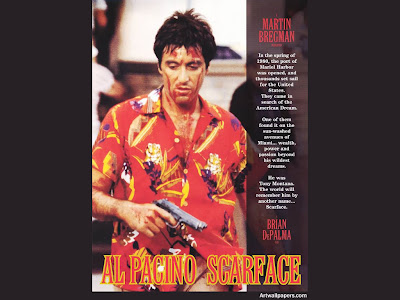 But now we are getting a special edition Blu Ray that will cost $999.99 and even I can't begin to think a situation that justifies it. Take it away /Film:

"... the ultra-luxe Blu-ray will include most of the extras currently on the DVD, as well as a few additional features — a documentary on the film’s place in culture, a picture-in-picture feature, and a scorecard feature that keeps count of the F-bombs dropped and bullets fired. Also included will be a digital copy of the film and the original 1932 black-and-white movie, of which the 1983 Brian De Palma version is a remake. But here’s where it gets really special — you’ll also receive a hand-painted humidor crafted out of untreated Spanish cedar. And best of all, since only 1,000 copies of the $999.99 edition will be made available, you’ll have the satisfaction of knowing that only 999 other people are are as obsessed with the film as you are and have as much disposable income as you do."

Come on man... who thought this was a good idea? You know there is gonna be a ton of cornball NFL & NBA players that love to quote Pacino's famous "Say hello to my little friend" line but couldn't explain what the movie really represents dropping the grand for this... no "regular" fan is gonna buy it. I still got my DVD version... so I'll stick with that. If you are inclined to cop this Blu Ray that is the price of a used car, it comes out September 6th.
Posted by Mike D. at 12:47 AM