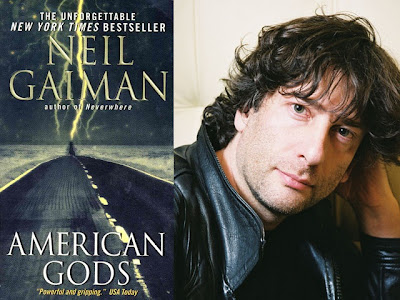 I am a huge fan of comic book/novel writer Neil Gaiman... he is probably my favorite writer in the whole industry. There have been talks to bring many of his properties to either TV or the big screen, and now it seems his unreal supernatural novel 'American Gods' will be the lucky property. What is 'American Gods' you ask? Awww, you guys suck at being nerds!!! Here is a description of it (via Wikipedia):


"American Gods is a Hugo and Nebula Award-winning] novel by Neil Gaiman. The novel is a blend of Americana, fantasy, and various strands of ancient and modern mythology, all centering on a mysterious and taciturn protagonist, Shadow.

The central precept of the novel is that gods and mythological creatures exist because people believe in them. Immigrants to the United States brought with them dwarves, elves, leprechauns, and other spirits and gods. However, the power of these mythological beings has diminished as people's beliefs wane. New gods have arisen, reflecting America's obsessions with media, celebrity, technology, and drugs, among others. The book follows the adventures of ex-convict Shadow, who is released from prison a few days earlier than planned on account of the death of his wife, Laura, in a car accident. "

There are talks that a director is already attached to this one (announcement is coming soon), and it's believed that Gaiman might actually write the screen play himself. He helped out Matt Vaughn on Stardust (I love that movie... nobody better say a word!!!) I would bet that it is either Guillermo Del Torro, Peter Jackson, but I wouldn't count out JJ Abrams and his crew of misfits either (rumor is they are big fans of the property). I would love to see someone like Edgar Wright, Neil Blomkamp or Matt Reeves (Cloverfield) get a shot at it. As long as they get this one done, and do it well, I will be happy!

On a side note, last month Gaiman tweeted a link to our site when we posted a picture of his Endless characters... so I'm gonna post another piece of art featuring some of his characters. These are a few of the "special individuals" that appear throughout the story American Gods. 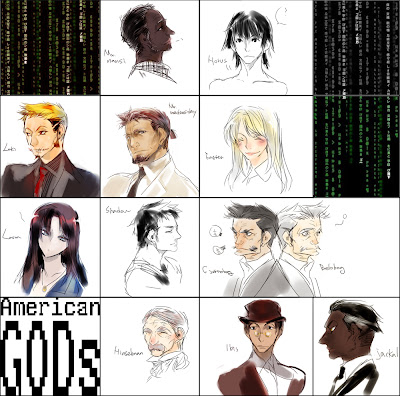