I often frequent the wonderful blog created by Ross entitled "Marvel Two-In-One: The Lost Issues" to see just who he is going to pair up the big meenie The Thing with. The blog was originally called Brave & The Bold: The Lost Issues, but Ross switched up to The Thing after a couple hundred posts to keep things fresh. He often choses characters that are outside the box for team ups (Transformers, TMNT, The Thundercats, The Flaming Carrot, and Star Wars) as well as typical superheroes, so imagine my suprise when I went over to his blog this past weekend and saw these two covers.

First up, we got my son Mikey's favorite current superhero Plastic Man. I love me some Eel O'brien, and his "bad guy turned good" story is one of the best in comics. I love the recent Kyle Baker comic edition, and so does Mikey. I think he would love this cover... which is such a natural combo given the fact that Ben is often teamed with Mr Fantastic, who is pretty much a rip-off of Plastic Man anyway (minus the cool banter amd even cooler googles). Excellent work. 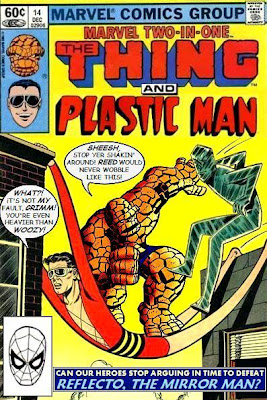 Next, we find one of my favorite fictional characters of all time, super spy James Bond. I personally would have went with Roger Moore's likeness over Connery, but thats just me. Yeah, I said it.... Moore was the best James Bond!!! I love the painted 1950-60's style cover, amd you gotta love that huge floodlight on top of the sniper rifle that Jamesy is carrying, no? Great work. 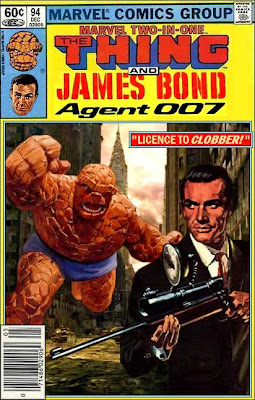 Two fine pieces of MS Paint art, wonderfully done by my man Ross. Stop by and show him some support by clicking here. He posts a few times a week. Become a follower, and tell him CCD sent ya.
Posted by Mike D. at 12:10 AM

Email ThisBlogThis!Share to TwitterShare to FacebookShare to Pinterest
Labels: Awesome Fan Art, James Bond, Marvel Two In One, Mikey, Plastic Man, Ross, The Brave and the Bold: The Lost Issues