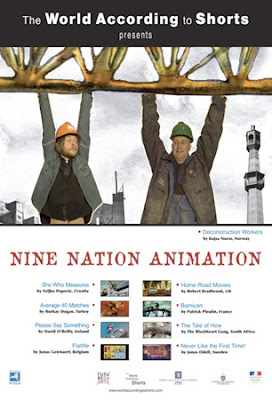 I’ve returned! With some news straight out of the Independent Underground! (my new coined term for great things in the Independent world that are unfortunately overlooked)


This week, I bring to your attention a trailer to this wonderfully collaboration of animated shorts from around the globe, presented by BAM’s The World According To Shorts program. The film opened up yesterday at the Manhattan’s IFC Center and will be continually playing there until Tuesday, October 5th. A brief description of the film from the IFC’s website reads as follows:

“A cat and a mouse carry on a dysfunctional relationship in a futuristic landscape. A Chinese monk sets out on foot with a tiger during the Tang dynasty and happens upon the giant Buddhas of Bamiyan. Two blue-collar workers dissect the meaning of “normal” life, as the world crumbles around them. A box of matches succumb, to their detriment, to the appeal of a cigarette. Four people recount their various encounters—triumphant or terrifying, euphoric or down-to-earth–with an unforgettable rite of passage.”

Being an avid supporter of independent films and filmmakers alike, this seems to be creative originality at its best. If you happen to be out in the Greenwich Village area this weekend I urge you to check out this 82 minute film and leave your thoughts and comments for us here at CCD!

For more information, please visit the IFC Center website.
Posted by Mike D. at 11:28 AM