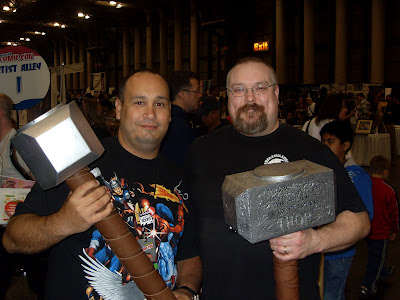 One of the coolest moments of the 2010 NYC Comic Con was the day Sam and I happened down a row of Artists Alley and came across the Skelton Crew Studios table. Israel Skelton was there displaying his art... but unlike most of the other artists in the area, his art were not drawings. No, his art was much more 3-D and practical. You see, Israel is a sculptor and he uses his talents to replicate some of his (and ours!!!) favorite weapons and props from the movies and comics. I use the word "replica" lightly... cause these things were no fake versions that just look like the original. Oh no, these things were heavy as shit and sturdy, and I could have probably knocked the shit outta somebody like the Thunder God himself with Skelton's replica Mjolinr (Thor's Hammer). He also had Thunderstrike's mace and Hellboy's gun, The Samaritan, on display. Check out this interview we did with Israel here:

Very cool stuff, and a very cool guy. I especially like the Key replicas he is making from the Locke & Key comic book series. Those books are written by Stephen King's son, Joe Hill, and are critically acclaimed (and fan approved as well!!!). The book series is about to be adapted into a TV show, so stay tuned for more details on that!!! You can buy lots of the cool stuff that Israel and The Skelton Crew staff have to offer by clicking on there website here. Thanks for the interview Israel, and keep up the good work!!! 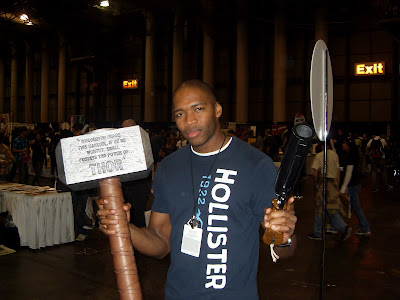