"Artin It Up" with Tommy Lombardozzi - CCD's All Horror Week Edition

ARTIN’ IT UP: VOLUME 2 - HALLOWEEN FUN! By TOMMY LOMBARDOZZI

Hello all! Well it’s been a bit since I’ve done my ARTIN’ IT UP article for good ol’ C.C.D. I just needed time to refuel and re-inspirationalize myself. Well, I’m back now, like a zombie reanimated due to a nuclear waste spill, roaming the land for brains and beer!

Now, I will use that not-so-subtle segue to jump right into this latest edition, and first VOLUME II edition, of “Artin’ It Up”. Let’s have some Halloween fun, you fucks!

Mr. Mike D. had asked all of us C.C.D. contributors for some all-new ALL-HORROR content for the blog to be used the week prior to All Hallow’s Eve. Little did that nigga know I was actually planning to make my return to the page with just such artwork! Bwaaaahahahahaha! 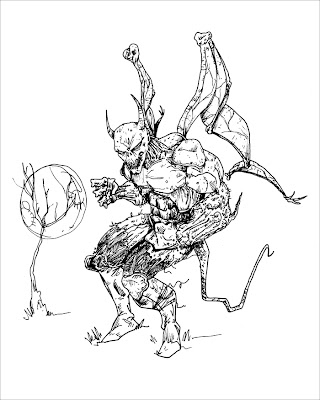 I did this in 1996. It’s just an intense looking demon-creature. It’s done with a pen. I thought it’d be nice to start off with a TL throwback. So there ya are. 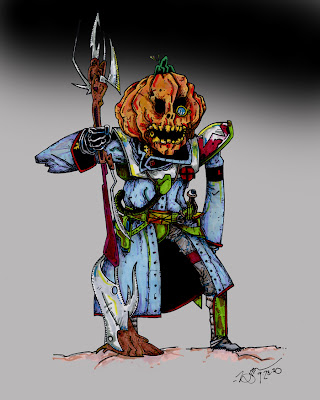 When I started doing some terror-themed art back in September, I came across a sketch I did in one of my college notebooks of this guy. I remember doing it, with the intention that I’d redraw it properly at some point. Well it only took me 6 years. Better late than never! A creepy-lookin’ Jack-O’-Lantern head is always nice… and what component could one add to that to further the fright-factor? Yes, you guessed it… NAZISM! Really scary! Pretty straight forward idea, I’d say. It’s done with paint marker, marker, and some pencils (colored and that other kind).

A few weeks ago I watched a documentary about the history of graffiti called ‘Bomb It’ (I recommend it, especially if you’re an artist: Check it out here. It’s also on streaming Netflix, which is where I watched it.) I usually like to listen to music when I’m doing my artworks, but since my iHome stereo thing wont play at full volume anymore (I have no idea why), I have been watching movies instead. Thing is, ya can’t WATCH movies and draw at the same time. So, actually what I do is LISTEN to movies. I tend to either put on something I’ve seen a million times before, put on a “talking heads” movie (dialogue-driven), or, put on a documentary. Well, I was drawing as I was “watching” ‘Bomb It’, but every time I’d look up from my work, I’d see some great image on the TV! ; These really amazing street artists all over the world doing fantastic shit with bold colors and strong lines. It bled into my creepy creating and I drew this guy; Zombieface! I drew it in thick-ass Sharpie and then colored it with colored pencil. It may not LOOK like a piece of graffiti, or what you might expect a piece of graffiti to look like, but it sure was inspired by what I was seeing (yes, eventually I stopped listening and actually started watching.) Catch that movie! And, enjoy the work below. 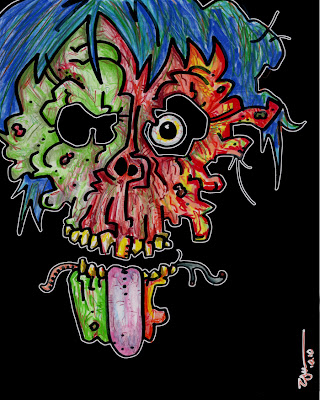 #4: “NIGHT OF THE LIVING DEAD KITTY”
The name says it all. This is done in marker. Need… mouse… brains. Reow. 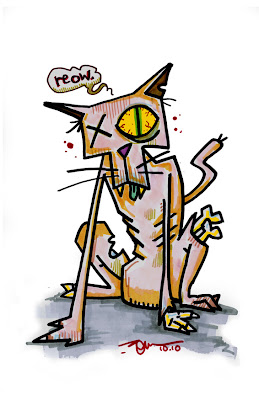 ***Please click Read more below to see more of Tommy L's great artwork***
#5: “PSYCHO”
Much of my work is inspired by music & movies. This next piece is one in a series of movie-inspired works I did awhile back (you may remember seeing my ‘2001: A Space Odyssey’ drawing way back in one of my first C.C.D. articles.) These were basically pop-art pieces based on some of my favorite movies. This was done back in December of 2007. I did the drawing of the ill-fated Janet Leigh in paint marker. No sketch, just very free-form. I added –“painted”- the blood digitally. I think it’s an effective piece and captures the spirit of Hitchcock’s most famous murder. What do YOU think? 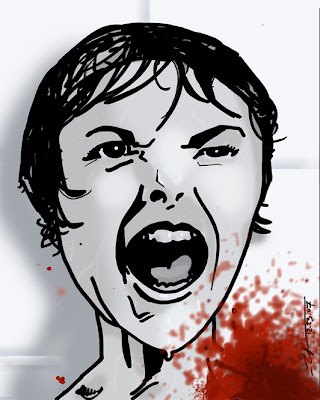 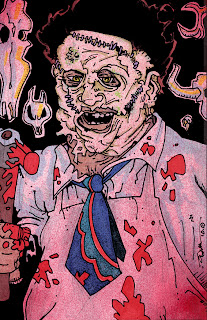 Keeping with the movie-themed art, I bring you LEATHERFACE! This one is brand new and done exclusively for this latest “Artin’ It Up!” article and C.C.D.’s ALL-HORROR WEEK. If you’ve read my “3 Favorite Horror Films” article earlier this week, you’ll see that the original ‘Texas Chainsaw Massacre’ is one of my favorite horror flicks. SO, I wanted to do some pieces based on those movies. This was one of ‘em. This is paint marker, marker, and spray paint. There’s a little bit of pencil in there, too, for gray tones.

My favorite creeper movie, AND one of my favorite movies in general, ‘An American Werewolf in London’ has inspired this one. This is a pencil and charcoal drawing of Rick Baker’s always-menacing wolf creature from the film. What a design! This one took me a bit of time. I never do full drawings in pencil… and I rarely ever use charcoal… but this was alotta fun AND a challenge. I wanted to make this piece a little more realistic than I usually aim for. I hope I’ve succeeded. 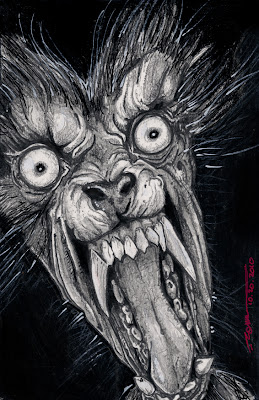 I just bought the “… American Werewolf…” Blu-Ray disc today, and if you’re a fan of this movie, I recommend it. It has a really great full-length, BRAND NEW documentary about the making of the movie, plus a ton of other great shit (outtakes, make-up features, interviews, etc.) All for $12.99! See You Next Wednesday! 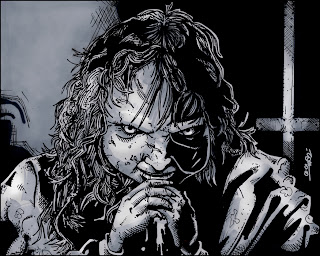 This is another one based on one of my all-time favorites, ‘The Exorcist’. It’s still a real spooky and fucked-up movie. Who wants to fuck with Satan?! Not me! This is a stylized drawing of little Reagan MacNeil as possessed by the demon, Pazuzu! Initially I planned to color it with watercolor paints, but I liked the black and white of the inked piece. It had a lot of weight to it, a lot of drama. So, I added some grey hues with marker and there you have it. This, also, is a piece done exclusively for this article. C.C.D., bitches!

If you’ve read the aforementioned “3 Favorite Horror Films” C.C.D. article I did earlier this week, then you may recognize this creepy fuck! It’s Brother Davey, from 1979’s ‘Tourist Trap’! My favorite horror cheese-fest! This is done all in paint marker, with some red and black spray paint on top to add some texture and darkness. The effectiveness of this piece, especially because of its simplicity, makes it my favorite of the all-new, All-Horror Week pieces. 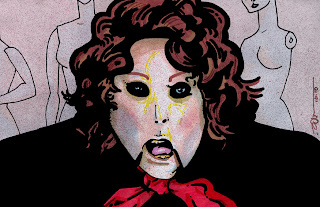 Man, after all the heaviness and creeposity of the last few pieces, let’s get a little lighter with some household possession and colored pencils! Here is…

Another one based on a classic film, 1982’s “Poltergeist”. Little Carol Anne is announcing the arrival of the Freeling family’s uninvited guests via their TV set (or are the FREELING’S the uninvited guests?! Hmmm… ) This one was just a little bit of fun, done in colored pencil, in a style that Carol Anne may have attempted. Boo! 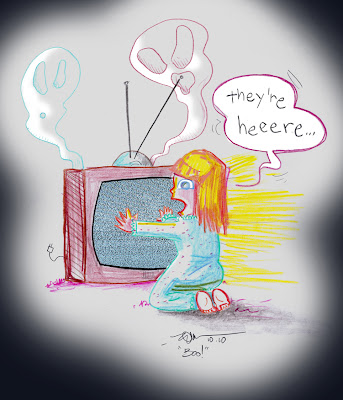 Again, the name says it all. This is a simple, silly little drawing done in marker. Freak bastard! 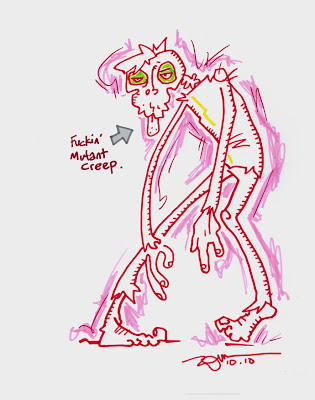 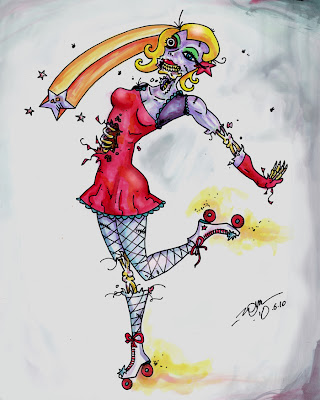 The last of the bunch, this was based on an old classic tattoo-style drawing of a roller derby chick that I clipped out of a roller rink advertisement/postcard. I knew I wanted to do my take on that drawing eventually… and since I was in my creepy-drawing mood, I figured I’d kill the bitch! So, now she’s a zombie… with roller skates and a cute ass! This was done in ink and watercolor. I’ve been trying for weeks to convince one of my female friends to be this chick for Halloween, but so far, no takers. How about you?! I’ll do the make up! C’mon… ! PLEEEEASE?!?! Bah… maybe next year then.

Well that’s it for now, C.C.Degenerates. I hope you’ve enjoyed “ARTIN’ IT UP: VOLUME II, #1”! Write and lemme know what ya think. Also, if you know anyone that needs an artist, have them hire ME! I’m THE BEST!!! Plus, I need the dough! Sigh. Anyway, have a great Halloween! Be safe and have fun. And don’t forget to spread the word of Cultural Compulsive Disorder! Become a follower and tell your friends to, too! Until next time, freaks & creeps…

PS. Here’s an added bonus. Talk about a TL throwback! Here are two drawings of Freddy Krueger that I did when I was 11! 1988 in the house, motherfucker! Enjoy! 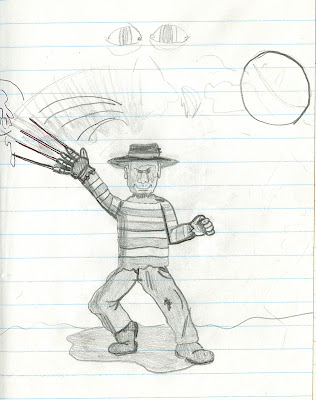 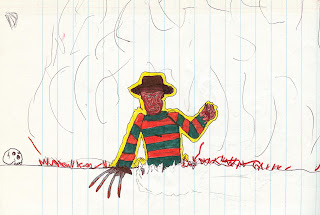 Email ThisBlogThis!Share to TwitterShare to FacebookShare to Pinterest
Labels: Artin It Up, CCD All Horror Week, Fan Art, Tommy Lombardozzi