Hey kids, it’s the day before Friday and that means its time for another installment of Throwback Thursday to hopefully help get you through your day and make that weekend come just a little quicker. Last time, much to the delight of no one judging by the ghost town that sprang up in the comments section, I reviewed some Rap Attack mixtapes from the mid 90’s. Maybe they were a little too local or obscure, I dunno. The songs were all great though, so whatever. What the hell do you people know anyway? Jerks.


So where was I? Oh yeah, this week, I’m switching things up a bit, as this column isn’t going to cover music at all. Instead, your throwback this time around is toys. 80’s toys. Forgotten 80’s toys. That’s right, in response to the complete lack of response my last article got, I’m going even MORE obscure. Whatever, I live dangerously. Anyway, without further ranting from me, here are 5 cool toy lines from the 80’s that I’m pretty sure nobody but me even remembers.

The 80’s were a great time for toys. Far better than today, despite all the advances in tooling, sculpting and articulation, conceptually the toy lines of the 80’s violently molest anything you can find on the shelves of a modern Toys R Us. Toys were a way bigger deal in the 80’s too. Aside from TRU, there was Child World, and Lionel Kiddie City, both of which were also giant stores dedicated solely to the sale of toys. Beyond that, stores like Sears, Consumers, Macy’s (when it was still called Macy’s/Bamberger’s), Gimbel’s, and Bloomingdale’s ALL had toy departments where kids could get their action figure fix. Don’t believe me? Go to Toys R Us today, and aside from wrestling figures, you’ll find shelf space dominated by Star Wars, Transformers, GI Joe, and He-Man, all toy lines that were born in the 80’s. Of the big toy companies of the 80’s only Hasbro and Mattel still survive today, but back then companies like Revell, Remco , Tomy and Ideal contributed just as much to the wealth of great boys toy concepts that were abundant in the 1980’s. Let’s check some of them out!

MANTECH: Released by Remco in 1983, Mantech were among the first action figures I can remember owning. I don’t remember what the story line was, but they were really cool figures, around 8 inches tall, and all of their limbs and accessories could be interchanged in pretty much infinite combinations. There were only 6 figures ever released. The good guys were Laser Tech, Aqua Tech and Solar Tech and the bad guys Nega Tech, Doom Tech and Terror Tech. They also had 2 vehicles, the Traxon and the Terrorizer and a playset, the Battle Station Laser II. 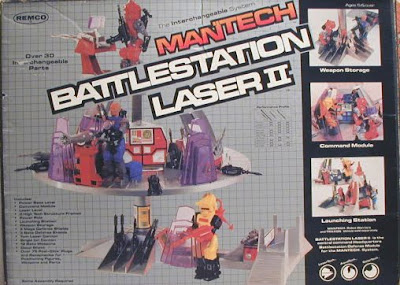 Apparently, Mantech was also the first instance of me being a completely spoiled child because I had every one of these. The Battle Station was particularly cool, especially to 4 year old Joey. It was enormous, it had all kinds of computers and weapons, and tons of pegs and holes where the weapons that came with the figures could attach. Unfortunately, as most toy lines from the early 80’s that didn’t have a cartoon or movie for support, Mantech was crushed by the Star Wars and He-Man juggernauts. There was allegedly a Marvel comic book tie in, but unfortunately that wasn’t enough to save Mantech from becoming a forgotten 80’s toy. 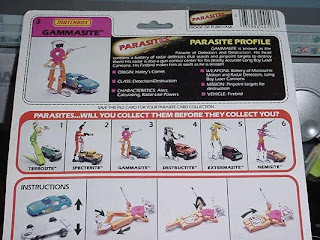 PARASITES: Released by Matchbox in 1985, I don’t know all that much about these. In fact, of every toy line on this list these are the only ones I never had as a kid. But thanks to the blessing/curse that is my audiographic memory, the commercial is pretty much ingrained in my head. “From Halley’s Comet come… The Parasites!” They were essentially little cars that flipped up to reveal a robot folded up inside and were basically Matchbox’s attempt to capitalize on extreme popularity of the Transformers. Since I never had one, I have pretty much no emotional attachment them, and can’t really think of much else to write. 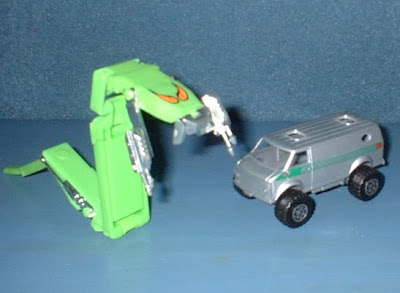 Plus I couldn’t even find the cool commercial I remember, I did find this one instead. It sucks, and don’t ask me who the fuck Peter Greenwood is either. Ok fine, this entry was terrible. The rest of the list is better, I promise.

POWER LORDS: Released by Revell in 1983, Power Lords were definitely an attempt to cash in on the He-Man’s popularity but they were pretty cool toys in their own right. Each toy had its own action feature. The main character, Adam Power, could transform into a cool-looking alien by pressing the button on his waist. By transform, I mean you push the button and his upper torso would spin around to reveal a different body on the other side.

The Story went that Power had a cosmic Power Jewel he used to protect the galaxy from the evil dictator, Arkus. Arkus wanted to steal the Power Jewel and capture Volcan Rock, Power’s stronghold, in his quest to conquer the galaxy. Adam Power was joined by Shaya, the Queen of Power and Sydot the Supreme. Arkus also had minions, with possibly some of the most awesome character names in toy history – Raygoth the Goon of Doom, Griptogg the Four Fisted Brute, Tork the Turning Terror and Disguyzor the Deadly Deceiver.
Almost unbelievably, there are no Power Lords commercials anywhere on the internet, so you’re all gonna have to settle for the Power Lords comic book advertisement that was on the back cover of like every Marvel comic in 1983. 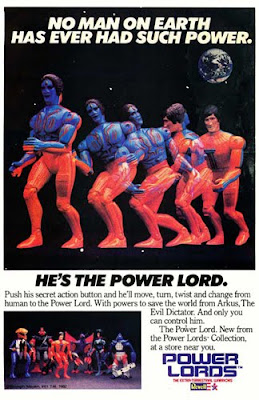 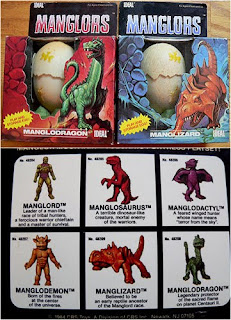 MANGLORS: Manglors were released Ideal Toy Company in 1984 and 1985. My mom was a neat freak and I was never allowed to have “slimy” toys, so Manglors should have been off limits to me. Fortunately for 4 year old Joey, Grampa Joe didn’t know about the restriction so I had me a Manglor. The first wave consisted of Manglord (which was initially released with a playset Manglor Mountain), Manglosaurus and Manglodactyl. The second wave, which were packaged with plastic eggs, included Manglodemon, Manglizard, and Manglodragon. I had the Manglizard in case you’re all wondering. Manglors could be bent, twisted and even ripped apart and reassembled as their bodies were rubbery and kinda sticky.
While looking for pictures of the things for this article I found out that the line was the subject of controversy. Consumers Union's children's publication, Penny Power challenged the claim that Manglors could be torn apart and reassembled, and found that they could not get the product to live up to its advertising claims, leaving a Manglodemon in many pieces that they were unable to reassemble. The packaging of the toys encouraged children to mix and match the parts of the various Manglors, but Consumers Union claimed it was not possible to get them to hold together as demonstrated. This goes directly against my memory though, because I remember ripping my Manglizard up and reassembling it. I also remember the thing was so fuckin sticky that it collected every bit of lint in the living room… which now that I think about it, made it impossible to put back together. Eventually anyway. 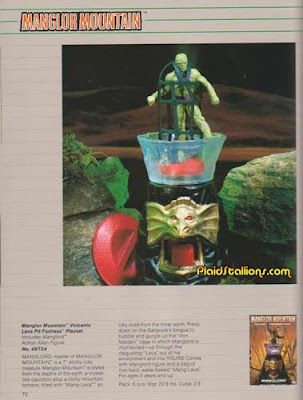 STARRIORS: Created by Tomy and Marvel comics in 1984, Starriors are probably my favorite toy line on this list. A huge amount of time and energy went into creating a back story for the Starriors, each toy came with a mini comic book, and Marvel produced a 4 issue limited series written by Louise Simonson and with really beautiful covers by Bill Sienkiewicz. 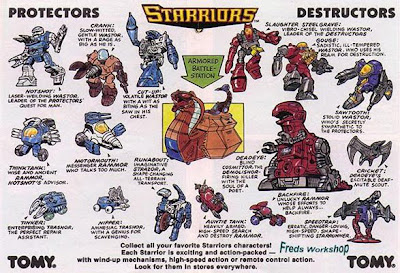 The story went like this: In the future, solar flares threaten all life on Earth. Earth's scientists build three classes of intelligent machines, Protectors,( to restore the Earth for human use), Destructors, (to ward off any potential alien invasions), and Guardians (to protect humanity after they go into a hibernative state underground). The brains of the Starriors, called control circuits, are crafted in the human image. The leader of the Destructors, Slaughter Steelgrave, becomes insane at the thought of deactivation upon the restoration of the humans, and enslaves the Protectors after what he believes to be a successful attempt to destroy all of the Guardians. Eventually, the human race and the Starriors' mission is forgotten as a reality and regarded as a myth - none of the Starriors had been activated when the humans disappeared. Sometime later, a human skull is discovered. The story begins just as a band of Protectors, eventually joined by a few dutiful Destructors, sets out to release the humans from their overly prolonged hibernation. 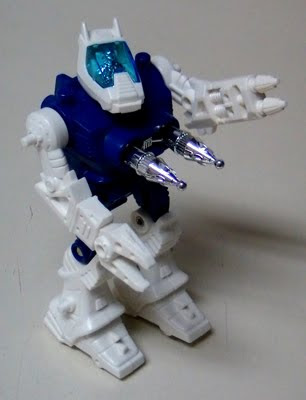 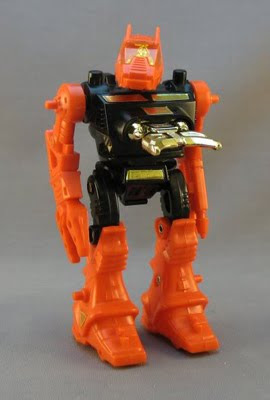 The Starriors toys all had a mechanical feature. Most of robot action figures were simple windup toys, you wind them up and the weapon in their chest or on their arm would spin or gyrate. The larger “dinosaur” type toys could walk or roll on their own and transform. The smaller ones also would roll on their own. The comics gave each character a well fleshed out origin and personality, which for me, made them even cooler. 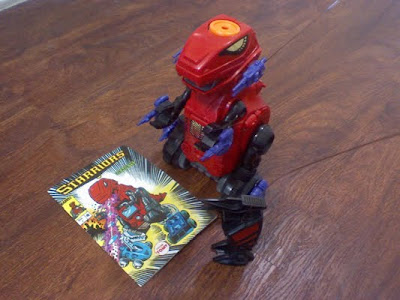 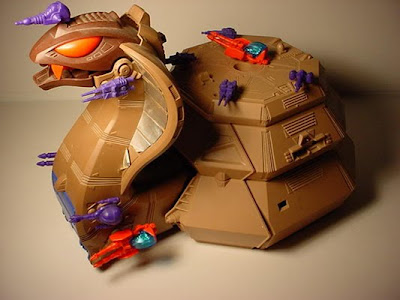 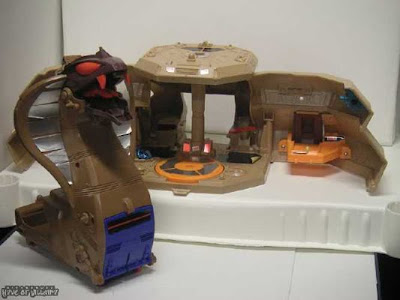 Two of my favorite toys from the line were Deadeye and Cricket, and the Armored Battle Station playset. Instead of being windup, Deadeye was remote controlled (the Cricket character was actually the remote) and could be made to roll forward by clicking the Cricket control. Deadeye also fired discs from his mouth. The Armored battle station was just a really cool playset, and the giant cobra could be fired off the front like a battering ram.

Well that’s it for this week. This was fun, and in writing it I thought of about 10 more obscure and forgotten toy lines, so I definitely have another one of these in me.

Ok, aside from being obscure, every toy line on this list has one thing in common with each other, none of them had a cartoon (which is probably why they ended up being forgotten). Well, as a bonus throwback for you, here’s a cartoon that never had a toy line. Vytor, the Starfire Champion was a cartoon that aired very briefly in 1989 when it preempted either GI Joe or Transformers for a week one afternoon and was never seen or heard from again. Except in my head, because I swear to you, thanks to my audiographic memory, I’ve had had this theme song stuck in my head for the past 20 years. I’m serious, a theme song I heard 5 afternoons in 1989, and I can sing the fucking thing verbatim. I told you it was a curse. Honestly though, if you have any memory at all of this, you get SERIOUS geek points.