Spike Jonze Delivers The Bone In His Newest Short Film

I love everything that director Spike Jonze does, but this new short film of his may take the cake. It is called 'Mourir Aupres de Toi' (To Die By Your Side) and takes place in the famed French bookstore Shakespeare & Company. Oh, and it is a stop motion masterpiece. This is the best three minutes you will spend today. Watch some great literary characters from the past come to life at the hands (and voice) of a true genius like Jonze. Click after the jump for the complete film and some quotes from Jonze and fellow collaborator fashion designer Olympia Le-Tan. 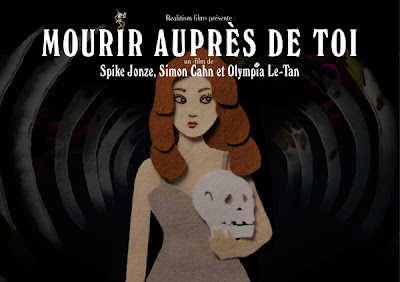 
and this is a behind the scenes video that was posted on Youtube:

How did the film come about?
I met Olympia in Paris through friends of mine. She was just starting to make the bags for her friends. She had a bunch of the scraps in her bag, all of the cut-out pieces of felt. I just loved it. I loved all the artwork she picked, the texture of it, the stitching of the felt. We joked about making a film and just went for it. It was this thing with no schedule, no pressure and no real reason to be—other than just that we thought it would be fun.

Did you write the story together?
Yeah we did. We would look at all the artwork over lunch whenever we would be in the same city, noting any ideas that would just make us smile. It was done like that, with no real plans.

What’s your creative process?
You just start with what the feeling is. For this one the feeling definitely started with the handmade aesthetic and charm of Olympia’s work. Instantly I had the idea of doing it in a bookstore after-hours, imagining the lights coming down and these guys off their books. Me and Olympia both wanted to make a love story, and it was fun to do it with these characters. It evolved naturally and it all just started with the feeling. From there you entertain yourself with ideas that excite you.

What inspires you?
People inspire me. Humberto Leon and Carol Lim [from Opening Ceremony] and the confidence and creativity in how they run their business. Pixar’s really inspiring, they make films in the best possible way. They’re always focused on story. I could list a million people that inspire me all the time. David Bowie’s music, Charlie Kauffman, David Russell. A lot of people that I work with too, just conversations I have with them about what we want to do.

To read an interview with Olympia Le-Tan about the making of the animation visit our Facebook page here.